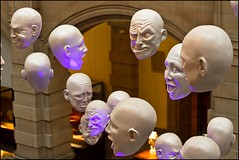 I just critiqued a short piece where some friends are driving home from a party, gossiping about others they just left. There is some description of the drive, but the piece was almost entirely talking heads. Worse than that, since we get no description of the speakers, they’re disembodied talking heads, without the fake smile and coifs of a newscaster to look at.

Granted, the dialogue is what this story is about; showing how these friends cut others down. The problem for the reader is that we’re not there (or even watching the scene on television) and if the writer doesn’t give descriptions of setting, expressions, and vocal inflections, we have no means of getting there.

Talking heads are great for an intense discussion in a novel. The reader’s focus is driven exclusively toward the words exchanged, heightening their importance, but that’s in the context of a longer story where the personalities, relationships, physical descriptions and objectives are already set. Even then any emotions arising from the words exchanged should be supported with actions, expressions, and vocal inflections.

“Give the character’s some business” is one oft repeated piece of advice, and in the story I just read that’s what the writer’s interjections of traffic does. But traffic is what the characters might notice, not what the unfamiliar reader needs to see.

“Put yourself in the character’s situation and describe what you see” is another aphorism that might have been applied, but what the character sees and what the reader needs (wants) to see are different things here. The reader is there in the car, but is not familiar with the characters the way the characters are with each other. What would a new kid in town notice or an invisible passenger wonder, or what is a movie camera going to capture?

More importantly, if we were directing this scene, what have we told the cameraman to focus on? What expressions, what camera angles, what shots of passing scenery or around the inside of the car are important to getting this scene across? We (the writer/director) already know what’s going on and we need to select visuals (and for the writer, other senses as well) to communicate the point of the scene.

Again, traffic might be what you, travelling with old friends through familiar territory, are most aware of, but there are backstories and unspoken agreements and known shared and conflicting perspectives and familiar tones of voice and expressions that an outsider isn’t privy to, that reassure and explain more fully the meaning of the words. Giving the reader only dialogue and traffic descriptions limits the reader to poor vision, as if we are very nearsighted and can only make out shapes and gross movements. It also keeps us far in the distance and makes it difficult to believe or to connect to the characters and the story.

If you give the characters some business, don’t just stop at relevant. Don’t pass up on the opportunity to chose business that helps to define the personalities or the characters’ relationship to each other or to the friend left behind, or to provide a metaphor for the point of the scene or of the story overall.

Don’t throw in the first thing that comes to mind just because it fits .