I don’t read a lot of books when they first come out, I don’t see a lot of movies in theaters or even when they first arrive in DVD format. It could be that I don’t like being part of a crowd, or that I like things to stand a little test of time before I spend the money and time required, but more likely it’s just that I’m lazy and slow.

So finally I’ve watched “Memoirs of a Geisha”. The movie is fine, the story okay, but what I really liked was 1) the moves of Mameha, top geisha from a rival house, to support the principle character’s rise partly for the good of the industry as a whole, and even more, 2) the character of the villain, Hatsumomo, and her portrayal by Gong Li. 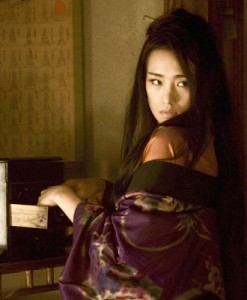 Hatsumomo is so unhappy. She is one of the top geisha in the city but she is in love and is not allowed to be, and she knows that she will never be successor to the house that she works for and for whom is earning money for. In other words, she has only half a present, and no future. Who wouldn’t be unhappy in this situation?

In addition to being unhappy she is also arrogant, impudent,  as well as very beautiful and talented in a field where adoration and power are keys. It’s no wonder given her circumstances and personality that she is also very bitter. That bitterness and conflict gives her a fragility and I’m somewhat surprised that she only breaks down to be mean to the principle character, and then only when her hopes and expectations of placing her little sister as a puppet successor to the house are destroyed does she fall apart.

As a character she makes me think of Blanche Dubois, from “A Streetcar Named Desire”. The fragile-ness, the importance of attention from men, the scheming for the future that she shares with Blanche make her story and her character much more interesting and attractive to me than the principle character.

1 thought on “Review and thoughts; Memoirs of a Geisha”